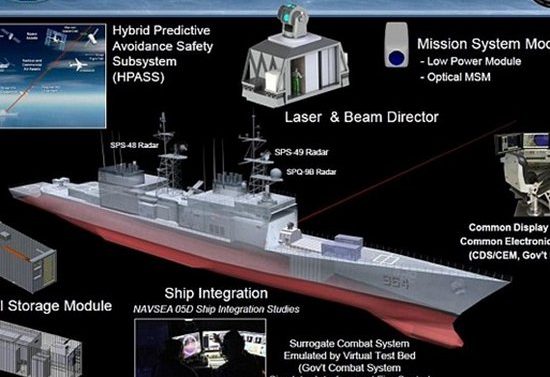 US Navy will fire 150 kilowatt laser on a test ship in 2018 and then from carriers and destroyers in 2019
The U.S. Navy is moving at warp speed to develop lasers with more lethality, precision and power sources as a way to destroy attacking missiles, drones aircraft and other threats.

The USNavy plans to fire a 150-kw weapon off a test ship within a year, he said. “Then a year later, we’ll have that on a carrier or a destroyer or both.”

That’s quite a jump from the kw AN/SEQ-3(XN-1) Laser Weapon System (LaWS), which deployed in 2014 on the amphibious transport dock USS Ponce.

And the kind of power needed to power such a weapon won’t come with a simple flip of a switch.

“The Navy will be looking at ships’ servers to provide three times that much power,” says Donald Klick, director of business development, for DRS Power and Control Technologies. “To be putting out 150 kws, they (the laser systems) will be consuming 450 kws.”
Few power systems onboard ships can support sustained usage of a high-powered laser without additional energy storage,” noted a recent Naval Postgraduate School paper titled “Power Systems and Energy Storage Modeling for Directed Energy Weapons”.

The paper said, “The new DDG-1000 may have enough electrical energy, but other platforms … may require some type of ‘energy magazine.’ This magazine stores energy for on-demand usage by the laser. It can be made up of batteries, capacitors, or flywheels, and would recharge between laser pulses. The energy magazine should allow for sustained usage against a swarm of targets in an engagement lasting up to twenty minutes.